Other than the glorious return of Gareth Bale in the summer, one of the transfer stories that caught the eye in the Tottenham transfer sphere was their pursuit of Milan Škriniar.

They got a long way into the negotiations, with claims of a potential swap deal with Tanguy Ndombélé circulating, but the ultimate result was Spurs pulling out and focusing their efforts elsewhere, bringing in Joe Rodon from Swansea instead.

There’s no denying the Slovakian would have helped José Mourinho’s defence far more than the Welshman has this season, but he would have also been far more expensive.

Gazzetta dello Sport look at what Inter’s squad is worth these days as they sit top of Serie A, and explain that Inter ‘wouldn’t have parted ways with Škriniar for less than €60m hard cash’, which Tottenham never reached. 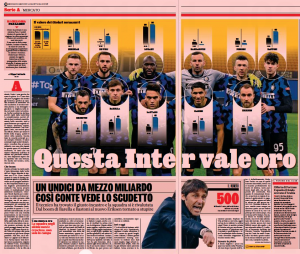 They then add that ‘looking at the Slovakian’s return this season, Conte should now thank his old enemy Mourinho’ for not pushing harder to sign the former Sampdoria man.

Whether Daniel Levy would have ever reached those heights, we’ll never know, but with Škriniar now a key member of this Inter side and them top of the league, there will likely be no second chances for Tottenham in the coming months.