Home Premier League Chelsea Chelsea ‘currently holding back’ – Blues not sure they want to pay...
SHARE

Chelsea are holding back on a move for Bayern Munich defender David Alaba as they are unsure they want to pay the finances involved in the deal.

That’s according to SportBILD, who say while the Blues are looking for a defender this summer, they are ‘holding back’ on moving for Alaba.

The Bayern star is out of contract this summer and so is free to negotiate a deal with whomever he likes, with the Bundesliga side having called off negotiations months ago.

He has subsequently, and predictably, been linked to all the big clubs around Europe, including Chelsea, where his agent, Pini Zahavi, has a special relationship with owner Roman Abramovich.

However, according to SportBILD, while they are looking for a defender this summer, those responsible at the club ‘do not want to afford Alaba’.

His salary demands are said to be too high for their liking, although Alaba and co deny this is the case and insist the numbers being reported around him are untrue.

What is true is that Zahavi has been travelling all over Europe outside London, although he is yet to sign anywhere, not even with Real Madrid.

The list of interested club is certainly ‘very attractive’, including the likes of Liverpool, Real Madrid, Barcelona, Manchester City and PSG. 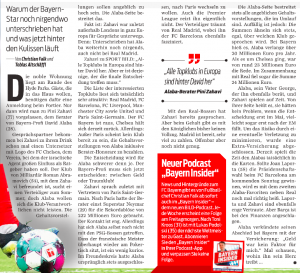 Bayern are, of course, out of it all and Chelsea are ‘currently holding back’ from making their move as they don’t want to pay.

Indeed, only PSG are showing a willingness to pay Alaba’s salary expectations, including consultants fees.

The decision is said to be ‘harder than ever’ for the defender, who will have to decide between money and his dream move.

He’s never been keen on Paris or the Premier League and wants Spain, with Real Madrid the dream but Barcelona a club that ‘fascinates’ him. However, neither club has the money to match what Alaba is reportedly demanding.

Thus the other clubs find themselves in the mix, although Chelsea don’t seem all that keen on getting too deeply involved, regardless of their relationship with Zahavi.