Manchester City youngster Diego Rosa has shared his dream of having Kevin de Bruyne come watch him play while on loan at Lommel SK.

Rosa joined the Etihad side at the beginning of February, moving in a £5.4m deal from Brazilian giants Gremio, where he had risen through the ranks to the B team over the last year.

City became aware of the Brazilian midfielder courtesy of his displays at the Under 17 World Cup in 2019, where he helped his side to the trophy on home soil.

It was those performances that had the City Football Group come knocking and, after starting negotiations with Gremio in December, he signed a five year deal with Manchester City on New Year’s Day.

They, though, very much see the youngster as one for the future and, as has become the norm at the Etihad these days, that saw him shipped out on loan to Lommel SK in Belgium. 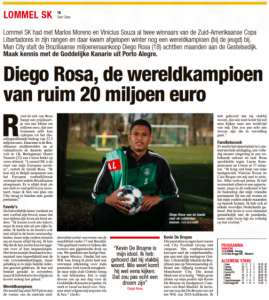 That deal is set to expire in June next year, but the youngster is hoping to catch the eye before then, and hopefully get spotted by one Manchester City star in particular.

“My idols in my position are Kevin De Bruyne and Casemiro from Real Madrid,” he told Het Belang van Limburg journalist Sven Claes.

“I still remember De Bruyne knocking us out of the 2018 World Cup.

“I’ve heard he lives nearby, so who knows, maybe he’ll come and watch one of my games. That would really be a dream come true.”