Yesterday, we covered a story from Portuguese newspaper Record which said fullback Silvio has been training at Belenenses.

The 30-year-old, who spent the last season at Wolves, has been a free agent since the summer, when manager Nuno Espírito Santo decided he didn’t need him.

But now it seems that after the Wolves disappointment he’s finally found himself a club, as Belensenses’ wish to keep him was revealed by manager Domingos Paciência on Thursday.

Speaking to the local press ahead of the game against Sporting, Paciência said: “He’s a player who was with me at Braga and also at Deportivo and asked to come and train. He’s a great player that would give us a good option, because at this moment, except for João Diogo who has suffered injuries, we have three fullbacks. I’m interested in counting on Silvio, let’s see about the president, the club, and himself.” 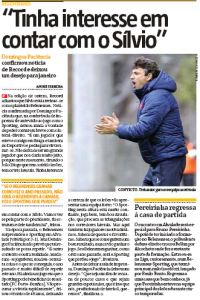 Signed on a free move from Atletico Madrid in 2016, Silvio only managed to make five appearances for Wolves, mostly because of the many injuries he picked up in his time in England.

Now the player is set to have a fresh start in his home country, trusting that Belensenses will be patient as they see him getting fit again.