Here are more claims from the Italian media claiming Manchester United are one of the clubs in the chase for Nuno Tavares.

It started yesterday, with ‘market operator’ César Boaventura speaking to Radio Marte and saying the Red Devils are in the race for the fullback.

The news is now repeated by newspaper Gazzetta Dello Sport. As they actually report a race between Napoli and Roma for the player, they point out that Manchester United are interested in him as well, as he’s being ‘followed’ by Ole Gunnar Solskjaer’s staff.

That’s all we have for now, with no further claims on the Red Devils’ talks or offers for the player. 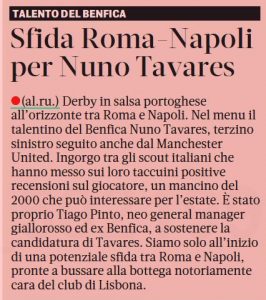 The funny thing is that despite claims from the Italian media, we’ve never seen the Portuguese press reporting Manchester United’s interest in Nuno Tavares.

The Red Devils had been linked to Sporting’s Nuno Mendes, who’s also a left-back, but never to the Benfica player.

That’s why we wonder if there’s been some kind of confusion here, or if all of a sudden, the Red Devils are interested in buying the Eagles’ left-back.