As everyone knows by now, Chris Smalling, on loan from Manchester United, is having a good season at AS Roma in Italy.

The centre-back quickly won over fans with his solid performances, and there have been many articles written about how the Serie A side could make the move permanent.

The main issue remains the demands from the Old Trafford club, who want around €20m for their defender, knowing they could get that fee from other interested clubs if they wanted.

That is a problem for Roma, who don’t really have that much spare cash to spend on a 30-year-old, but if they were to qualify for the Champions League, something could probably get done.

However, there is also the issue of the Italian side currently switching owners, as James Pallotta is in the process of selling the club to American billionaire Dan Friedkin, which is well underway. 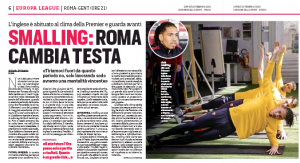 Corriere dello Sport have an article on Smalling’s situation in Italy at the moment, and among the few quotes they managed to extract out of him (mostly him saying he’s focused on the present and results), they explain the decision to buy him will actually come down to Friedkin himself.

After all, it’s his money, and with doubts surrounding the future of their current director of football, Gianluca Petrachi, it makes sense for the potential new owner to have a say in where his cash goes, to some extent.