Manchester United have been active in the window as they have already completed Jadon Sancho’s signing and agreed a deal in principle with Real Madrid for Raphaël Varane.

The Red Devils also have Kieran Trippier on their agenda for this summer.

On July 19th, AS reported that signing the Atlético Madrid defender is considered as a ‘priority reinforcement’ for the Old Trafford club.

Trippier was part of the England squad that lost to Italy in the Euro 2020 final and he’s now on vacation.

According to Mundo Deportivo, the 30-year-old is set to return to the Spanish club’s pre-season training in the coming days.

However, the former Tottenham Hotspur man’s future ‘is in the air’ and that’s because of the interest shown by Ole Gunnar Solskjaer’s side. 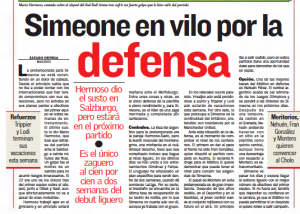 It’s claimed ‘Manchester United love him’ and even though the La Liga winners are standing firm [asking €40m fee], there’s uncertainty around the player’s future.

Friday’s edition of AS explains the England international’s continuity at Atlético ‘worries’ Diego Simeone, because Tripper is ‘insistently wanted by Manchester United’.