You know what? Considering there hasn’t been a lot of actual football to write about and the Italian press are stepping up a gear in their transfer stories of late, it had been a bit quiet on the Sergej Milinković-Savić front.

The midfielder is the centre of attention of at least one saga per summer, normally involving Manchester United, and with continuous rumours that Paul Pogba could be wanting a way out of Old Trafford, this year is no different.

What is, however, is the fact Lazio were in terrific form prior to the Covid-19 pandemic, and sit second in Serie A, one point behind Juventus with 12 games to go.

That means they are almost certain to qualify for the Champions League should the table stay the same, which gives the Italian club far more bargaining power, as Milinković-Savić won’t need to go elsewhere to find elite European football.

According to Gazzetta dello Sport on Thursday, however, that hasn’t stopped both Manchester United and Paris Saint-Germain from ‘pressing’ their interest for the Serbia international, as they continue to circle. 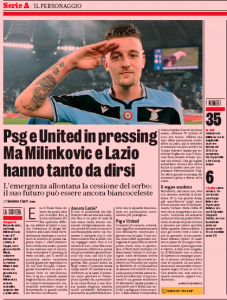 The French side are the more active, having reached out indirectly in the past few weeks to ‘understand the feasibility of an operation of at least €100m’, which could also see Adam Marušić move.

Once again, it appears this is all tied to Pogba, as his exit could lead the Red Devils to ‘return’ for Milinković-Savić to replace him.

So, until the Frenchman is sold, this doesn’t seem to have a lot to it for the time being.