If Monday’s edition of Tuttosport is to be believed, Liverpool have a really tough battle in front of them when it comes to tying down Emre Can for the foreseeable future.

We’ve covered it time and time before, so we won’t go into it again in too much detail, but bottom line is: the German midfielder can leave on a free next summer if he doesn’t sign a new deal with the Reds.

Over the past two months, only one club have really been trying to sign him, and that’s been Juventus in Italy, and they haven’t given up yet, at all, yet they aren’t the only ones anymore.

The Italian newspaper state three clubs have joined the race, and two of them are from the Premier League:  Manchester United and Chelsea.

The third, Bayern Munich, are thrown in there for good measure too, even if the acquisition of Corentin Tolisso would suggest a box to box midfielder capable of using his physical attributes to both attack and defend isn’t on their list anymore. 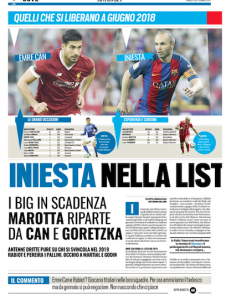 Of course, Emre Can going from Liverpool to Manchester United seems rather unlikely, but with Sir Alex Ferguson ignoring the midfield for so many years, adding another man in that role isn’t the craziest idea.

As for Chelsea, well, there’s a feeling that Danny Drinkwater, for all his ability, might not have been the number one target on Antonio Conte’s list this summer to bolster the midfield.

However, rest assured, Liverpool fans, Juventus are still well and truly the favourites in this race, having tried their all to get a deal done over the summer, only to be gently told where to go by Jürgen Klopp.

Manchester United and Chelsea might be interested, but it’s the Serie A project that is catching Emre Can’s eye.

At least, that ’s what Tuttosport, a Turin newspaper, would have you believe.

This is just the start of what is going to be a long four months or so for Liverpool fans.

And for Emre Can.