Spanish newspaper Mundo Deportivo has pretty much scoffed at claims Manchester United could get Jose Gaya as a cheaper option to Alex Sandro.

On June 23rd, The Daily Mirror reported Jose Mourinho had switched targets to the Valencia player having been ‘priced out’ of a move for Juventus left back Sandro.

The English newspaper said the Turin club are ‘demanding £50m’ whereas Gaya is ‘rated at closer to £30m’.

It’s fair to say this isn’t receiving agreement in Spain.

Mundo Deportivo says Manchester United ‘already know the price of Gaya’, and that’s €100m. It’s not thought Valencia would even listen to the Premier League club if they came calling for the 23 year old. 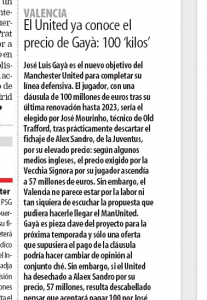 Only an offer that hit the player’s €100m clause would be acceptable, it’s claimed, and then Mundo Deportivo state if the English club won’t pay up for Sandro then they’re hardly likely to go higher for Gaya.

The truth on a real price may be somewhere in the middle. Valencia surely wouldn’t turn down €90m for the left back, nor €80m, €70m.

But it’s working out the weakness level which could be difficult if the Spanish club are so keen to keep their man.