It’s been at least a month since Manchester City and Sporting have stopped being linked to Velez Sarsfield winger Thiago Almada.

The Premier League side’s intention was to buy the player and loan him out to the Portuguese club, but due to the lack of an agreement with the Argentine side, things have gone silent for a while.

But there is some interesting news arriving from the Lisbon press, claiming both Manchester City and Sporting are still ‘attentive’ to Almada’s situation.

According to A Bola, the reason for that is that the player has failed to agree a new contract with Velez Sarsfield, making his departure more possible. 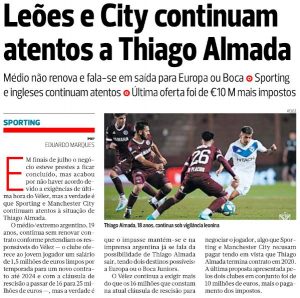 A Bola claims that Velez’s intention was to increase his release clause from €16m to €25m. After failing to agree the new contract, they will keep demanding that first amount.

But Manchester City don’t want to spend that much money on the youngster, as their last offer was of only €10m. So let’s see if anything can change in the coming weeks.