Manchester City and Manchester United will both have scouts at the Lisbon derby on Wednesday, according to the local media.

Newspaper Record says that both clubs will have eyes on Sporting and Benfica players, especially Bruno Fernandes and João Félix.

The outlet claims that although big clubs are often seen watching the Lisbon sides, this game is a big deal for putting one talent against the other.

Other clubs such as Juventus, PSG, Atletico Madrid and Bayern Munich will all be present as well, all to watch the duo. 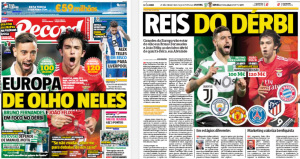 Regarding Bruno Fernandes, Record only writes about the interest from Manchester United, always recalling that he’s protected by a €100m release clause.

Now Félix is involved in a bigger race. Record says that Juventus and Manchester United are both negotiating for him, but the likes of Barcelona, Real Madrid, Manchester City, PSG and Bayern Munich all follow the youngster as well.

With the game being played for the second leg of the Portuguese Cup’s semifinals, this is certainly a good match to watch. Benfica won the first 2-1, so Sporting and Bruno must do their home job now.