‘United and City fight for Rúben’. This is a headline we’ve probably seen before in the past couple of years, and it’s featured in today’s issue of Correio da Manhã.

The newspaper says the Benfica defender is a target for both Manchester clubs in the January transfer window, each one for a different reason.

Manchester United had already been interested in the past, having ‘shown their will’ to get the 22-year-old in the summer market.

Now Manchester City’s chase is new, and has a lot to do with the injury suffered by Aymeric Laporte at this start of the season. 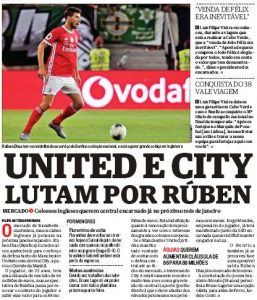 Ruben Dias is currently protected by a release clause of €66m, which is expected to be raised to €88m. The new contract has a lot to do with the attention he’s been getting, Correio da Manhã says.

It’s also claimed that agent Jorge Mendes has already told Benfica it will be hard to keep him at the club.

Manchester United scout Benfica every week, and Manchester City have been linked to several options since Laporte’s injury, but this is probably one worth shelving for the time being.

Correio da Manhã can be excitable when it comes to transfers and this could be another example of that.