When Raul Jimenez left Benfica to sign for Wolves it was a deal which suited everyone involved.

The striker hadn’t been getting enough time on the pitch for the Lisbon side and wasn’t able to find the back of the net often enough when he did. He’d already rejected a move to China worth around €40m, and Benfica stuck to that figure feeling they’d be able to cash-in eventually.

Jimenez went on loan, with the option to make the move permanent for the figure Benfica wanted. The loan worked well for Wolves, and last summer the big pile of money was sent to Portugal.

Talk of a possible exit has started, and now Raul Jimenez has spoke to Spanish newspaper Marca, and certainly not been against commenting on a potential exit.

When asked if moving for a figure of €100m or more would scare him, the Wolves star said: “For a Mexican player, or for a Mexican, it would be almost impossible, perhaps because of the kind of mentality in Mexico. It will be said that ‘he is not so good’, whether ‘he is worth it’… But if someone pays that amount of money for someone it is because he is worth it.

“Sometimes the amounts are stratospheric but I think football has changed a lot, and it can be achieved. For me it would be an extra motivation to know that I have to give more of myself, back-up what they are paying for you and continue giving things to talk about. It doesn’t scare me. Football is something I’ve always dreamed of, it has always been my life. Therefore, if it happens, it would be an important motivation to carry out such a transfer.”

Then asked what his next steps in football will be, Jimenez responded: “The important thing is to move forward. I am very good at Wolves, but you always have to look for more, you have to keep fighting. Now we are in fifth place in the table.

“The other day, I was talking with my dad and he said: ‘If some of the top 6 teams wanted to sign you, where would you go?’ 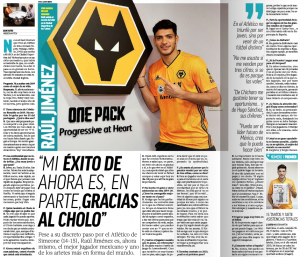 “I said; ‘But now I’m in the fifth!’ [laughs] I am on top of several teams that are considered ‘top 6’. I’m great here. Then, it would be to see the conditions, if it suits me, if it suits Wolves and the other team.”

Asked about potentially returning to Spain, the striker made it clear it’s something he’d look on positively, despite his difficult experience with Atletico Madrid prior to the Benfica move.