The Catalan sport media won’t give up on the transfer saga involving Georginio Wijnaldum and Thiago Alcantara, despite it genuinely feeling that not a lot is going on.

Monday’s edition of Sport states Wijnaldum is ‘one step away’ from becoming a Barcelona player. Ronald Koeman quickly identified his compatriot as a target, and it’s been insisted he wants to take him from Liverpool to the Camp Nou.

The midfielder’s contract situation makes a move easier, given he now has left than a year to run on his current deal.

A transfer fee is not thought to be a barrier to the move, with the Reds unable to ask for too much, given the prospect of losing Wijnaldum as a free agent in the not too distant future.

Sport believe the only thing in the way is Liverpool securing Thiago from Bayern Munich. Jurgen Klopp isn’t prepared to let 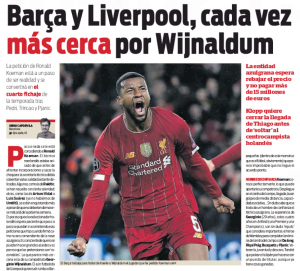 Wijnaldum go until he’s got his own target through the Anfield entrance.

There’s a confidence from the Catalan newspaper, yet the lack of detail still makes this whole saga seem wishy-washy.