This week, France Football decided to dedicate a large portion of their weekly magazine to Liverpool.

After all, the club is one of the most prestigious and reputable in the world, helped by their many Champions League wins and history of success domestically prior to the Premier League as we know it forming.

And, in true France Football fashion, a Liverpool edition wouldn’t have been complete without a quick chat with Sadio Mané, who was asked to comment on each one of his current teammates by the magazine.

Describing Jordan Henderson as the ‘relay with the manager and organiser on the pitch’ and Georginio Wijnaldum as the guy who ‘makes a mess in the dressing room’, the Senegalese forward dedicated a special spot to Naby Keita, who still isn’t a fully regular first-team player under Klopp.

He said: “He’s more than a friend for me, he’s a brother. It hasn’t been easy for him lately because he was injured for a long time, but I know he’ll come back at his best, because he’s working hard to do so.

“He just needs to improve his English to be understood more by everyone, but to be able to count on a true friend in the group, that’s priceless. It’s even calming at times.”

One man who he might not always be on best terms with is Mohamed Salah, with whom he had a fairly public spat against Burnley not so long ago, even if the player has since dismissed talk of regular friction between the two.

He said about the Egyptian: “He’s a crazy goalscorer and an exceptional player who can do everything. We have sometimes had our disagreements, but it remains a great pleasure to play besides him because I have the feeling we speak the same type of football.”

As for Jürgen Klopp, his neighbour off the pitch, it was the usual praise for the German from Mané, who, quite rightly so, very often lauds his manager. 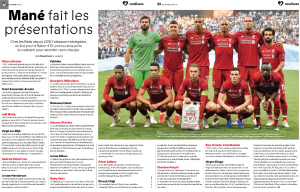 He concluded: “His secret, I think, is to be the team’s dad. Between us, everything clicked straight away. We all love him like a father and we fear him like one too. He takes up a lot of space in my life, and not just in football. He’s great as a person. I trust him blindly, like most of the dressing room, I think.”