Following their disappointing 2-1 loss against Manchester United in the Champions League, Paris Saint-Germain let out their pent up frustration on Dijon FCO on Saturday.

The Ligue 1 champions drubbed the small side 4-0, as Kylian Mbappé and Moise Kean found the back of the net twice each in hope this will get their form back on track over the coming weeks.

There’s also a couple of teams who will have enjoyed seeing the Frenchman smash a brace in 17 minutes, and those are Liverpool and Real Madrid.

The pair have been linked with Mbappé a lot recently, with the latter of the two on his case ever since he burst onto the scene at AS Monaco.

Liverpool’s interest has been more prominent in recent years, and with his contract at Parc des Princes running out in 2022, next summer would be the ideal time to pounce.

Paris Saint-Germain are trying to prevent that, with Leonardo making a renewal a priority of his ever since the transfer window shut, but nothing has happened just yet.

L’Equipe have an article on the matter on Monday, explaining the Brazilian director knows full well how important Mbappé is to the club, and failure to keep hold of him could end up costing him his job down the line.

Thus, he wants this done.

However, it’s not really moving at the pace he wants it to, and despite a meeting taking place between the two parties last week, movement ‘has not been significant’.

They haven’t even spoken about wages yet, as Mbappé’s entourage first want to know about Paris Saint-Germain’s project going forward.

L’Equipe explain they aren’t against a renewal, but they want to know more about ‘which players will be around him and the manager in charge’, with a desire to see fresh blood brought in ‘in key roles’ and be told how much money will be put towards ‘winning the Champions League’. 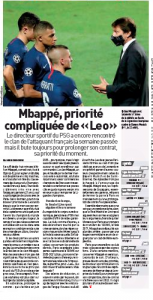 That’s where things get problematic, since Paris Saint-Germain, ‘severely affected’ by the financial impact of Covid-19, cannot ‘offer such guarantees’, bracing themselves for loss of ‘over €100m for the 2020-21 season’.

Despite all this, Mbappé’s representatives, ‘essentially his parents’, refuse to close the door to a renewal, but ‘it seems not to be a strong trend’.

In the background, it’s said both Liverpool and Real Madrid are ‘sharpening their weapons and polishing their arguments’, with both fully aware this could be the ideal time to pounce on one of the best players in the world, one who’s still only 21.

There might never be a better opportunity than this in Mbappé’s career to pull this off, and it would all depend on whether Jürgen Klopp’s side have the money to convince Paris Saint-Germain of letting one of their biggest stars go next summer.

In the end, it all depends on whether or not Leonardo’s charm ends up winning everyone over once again.

If not, it seems Liverpool could be one of the teams to watch.