Home Europe Liverpool player ‘willing to wait’ to get desired move – Has had...
SHARE

For the past few days, we’ve been seeing several stories from the Italian media claiming that Sassuolo are interested in the signing of Liverpool midfielder Marko Grujic and should try to get him this summer.

However, there’s still a lot of confidence from the Portuguese press that the player wants a move back to Porto; the club where he spent the last season on a loan spell.

A piece from newspaper O Jogo claims the midfielder is ‘willing to wait’ for the Dragons to sign him this summer, and won’t take a decision on his future until the club make an effort.

It’s said Grujic was really impressed with Porto’s facilities during the last season, and his ‘satisfaction’ at the club went grew as months went by, leaving him with the desire of going back as soon as he returned to Anfield. 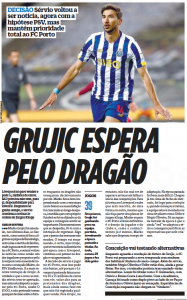 The problem is that his wish may not be enough, since a fee must be agreed with Liverpool.

O Jogo now says that the Reds intend to make between €10m and €15m with his sale this summer, and that’s too much for Porto, especially because they haven’t made any cash with transfers so far.

Since Grujic wouldn’t need any adaptation at the Dragons, there’s belief they can wait until the very last moment to make an effort to sign him.

As he’s not in Liverpool’s plans for the season, the Reds could end up giving in and letting him go for less than expected.