Home Europe Liverpool keen on youngster – Reds will ‘back out’ if price rises...
SHARE

Liverpool’s interest in Sporting Lisbon youngster Nuno Mendes has caused a delay in him signing a new deal at the club.

That’s according to A Bola, who cover the 18-year-old’s situation today and explain why he is yet to sign a new contract.

They report that while Mendes has a contract until 2025 after signing a new deal In June this year, getting him signed to another new deal is a ‘priority issue’ for those in charge of the club.

However, the process is ‘behind schedule’ for several reasons and Liverpool are one of them. First and foremost, no meeting has yet taken place between the club and his agent Miguel Pinho.

They are planning to make that happen by the end of the year, but there are more outside factors making things difficult.

For example, Sporting want to up his wages from his current €14,000 pay packet given that’s relatively low for a player who as ‘proved all his talent’ in the first-team so far.

That deal includes a €45m release clause, which they would also like to increase to ‘drive away’ the interested parties.

One of those keen are Liverpool, 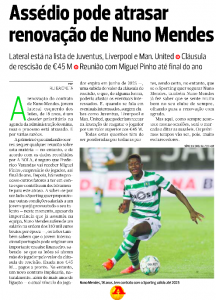 however, it’s believed that they could ‘back out’ of their intention to sign the defender should his release clause exceed the current €45m clause.

All of these issues have to be ‘weighed up’ by Sporting and his agent, with the only certainty that the Portuguese side wants to keep him.

The player, for his part, has made it clear he feels good at the club at this moment in time and is ‘looking forward’ to renewing.

However, ‘as always happens on these occasions’, the market will dictate what happens, and so the coming month could prove ‘enlightening’ say A Bola.