Liverpool midfielder Marko Grujic is close to sealing a return to Porto after the two sides reached an agreement on a €13m deal.

That’s according to A Bola, who say that a return is closer ‘than ever before’ after negotiations reached a positive conclusion.

The newspaper explains that the Serbian International is already aware of an agreement between Liverpool and Porto, which may allow him to return to the club for a fee of around €13m.

That figure is midway between the €10m the Portuguese side wanted to pay and the €17m that Liverpool were initially asking for.

He’s happy to make a return, having been ‘very satisfied’ with his loan spell last season and has already shared tales of his experience with friends in Serbia. 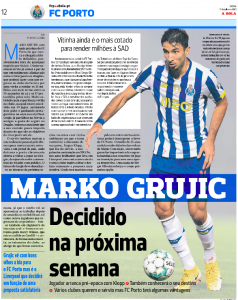 It’s expected his future ‘should be shaped over the course of the next week’ as the midfielder is due to report for pre-season training with Liverpool the day after tomorrow.

That should speed things up, but with a deal now in place and Grujic having enjoyed his loan spell last year, it’s felt Porto have ‘some advantages’ over the competition and can get him back.

Club have ‘rejected’ Tottenham’s offer for midfielder ‘in past few hours’...