Liverpool have been warned they’ve signed a player who has ‘fallen far short of his expectations’ in defender Ozan Kabak.

That’s according to Kicker, who warn Liverpool they may not be getting the player they think they are in the 20-year-old.

Kabak joined the Reds on deadline day of the January transfer window, with the Premier League champions moving late to secure defensive cover after an injury to Joel Matip.

His move to Anfield brought an end to months of speculation about a potential switch, with Kabak one of several defenders to have been linked with a move since last summer.

The youngster arrives at Liverpool with something of a burgeoning reputation, having been highly rated in Germany, and once wanted by Bayern Munich, before his move to Schalke.

Things have been difficult for him there, though, as Kicker explain today. They state that the centre-back has ‘fallen short’ of his expectations and potential at the club, having been expected to develop into a top talent there.

Indeed, they give him a 4.75 score for this season, which, for those of you who aren’t aware of the German rating system, isn’t great.

Whilst most ratings are out of 10, or sometimes 5, they use the German school grading system. 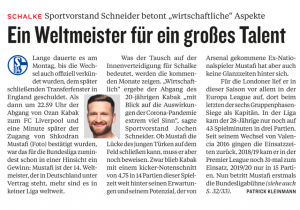 A six is the lowest possible grade and, taking it back to the school grade; it means that not only were things not up to standard, but there was even a failure to understand the basics.

That means with a 4.75, Kabak is very much on the bad end of the scale, with him getting a passable but borderline deficient rating.

It doesn’t make for pretty reading and any Liverpool fans hoping he is the saviour they need after losing Virgil van Dijk, Joe Gomez and Joel Matip may want to temper their expectations considerably.