The youngster has been left out of the first team squad, as manager Ruben Amorim wants him to be loaned out this summer to get more minutes.

But the Lions are in need of money, and instead of a temporary move, the former Liverpool player may end up leaving Alvalade for good.

Record writes that England is ‘back to being a solution’, as he has a good market in the country, and could find a new club in the coming days. 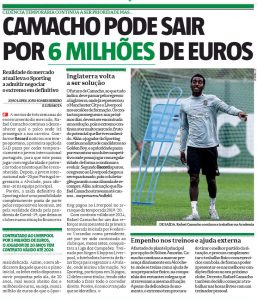 They say a return to Liverpool was ‘even equated’, since the Reds have an option to take him back to Anfield.

Record claims that the Premier League champions were ‘surprised’ with Camacho’s development at Sporting, since he’s a candidate for the Golden Boy award.

The Lisbon side are said to be demanding €6m to let Camacho go this summer, and the name of the clubs who are seriously going for him are yet to be revealed by Record.