Despite falling out of favour at Manchester United over the past few months, Eric Bailly’s future at Old Trafford has never really felt threatened, and it isn’t a new rumour sending him to Ligue 1 that’s going to change that.

The centre-back missed a large chunk of the season with an ankle injury, and despite being back since the end of February, he’s never regained his full-time starting role.

Mourinho’s reasoning was that wanted to give the players who had a chance of going to the World Cup more game time ahead of the summer competition, but at no point did he hint the defender was at risk of being sold in the coming months.

However, that hasn’t stopped Le Foot in France to try and get the rumour of a Bailly sale up and running, claiming that Marseille, who recently lost the Europa League final 3-0 to Atlético Madrid, are interested in the Ivory Coast international. 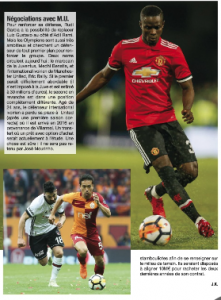 According to the magazine, ‘one thing is certain’ and that’s Bailly not being kept by Mourinho in the summer, with the Ligue 1 side ‘studying’ which route to go down.

Bought for around £30m, a full transfer would be very expensive to pull off, meaning they’re also considering the idea of a loan with a view to buy.

As the only semi-capable centre-back at Manchester United, we just don’t believe it. Sorry.