Paris Saint-Germain’s interest in signing Marouane Fellaini on a free isn’t going away, or, at least, Le10 Sport are ensuring it doesn’t go away.

The French magazine have been the ones pushing this story for quite some time now, and with less than six months left on the Belgium international’s deal with no sign of him renewing at Manchester United, they’re preparing to pounce.

The Ligue 1 leaders are now allegedly expected to come forward with a ‘concrete offer’, which will happen ‘in the coming days’, likely to be a four-year contract worth around €5-6m/year after tax. 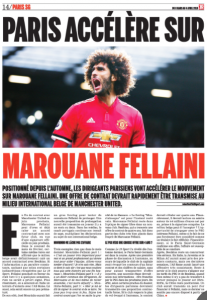 If the offer is confirmed, then Fellaini is expected to really think about it, even if he knows he might not be a regular starter at Paris Saint-Germain.

Of course, the French club aren’t the only ones interested in the Manchester United midfielder, as Besiktas, Juventus and AC Milan, as well as Roma, are said to be after him.

José Mourinho has made it very clear he would prefer it if the former Everton star stayed at Old Trafford, but, as things stand, that doesn’t look likely.