Home Europe Ligue 1 sensation has had multiple ‘proposals’ from Manchester United – He...
SHARE

Eduardo Camavinga is one of the players being most linked with Real Madrid ahead of the summer transfer window. Paul Pogba claims have dropped away, and it’s now another midfielder Zinedine Zidane would be looking at.

Camavinga is only 17 years of age, but has already broken through at Rennes. That’s seen him attract interest from around Europe, yet it’s Madrid who have had the most stories.

Monday’s edition of Mundo Deportivo explains Camavinga has already given his approval to joining Real Madrid, despite receiving offers from elsewhere. According to the story, Manchester United have made multiple ‘proposals’ for the player, yet he’s not overly keen on a move to Old Trafford.

That’s because he wants to ‘wear white’, and is especially keen to play for Zidane. 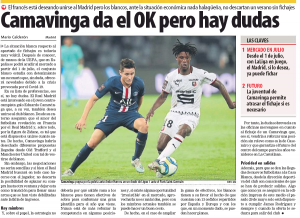 However, a move may not happen this summer due to various factors. Rennes are looking for a huge fee, Madrid wouldn’t want to go too high, and there’s too many squad players at the Bernabeu.

That may give some light for Manchester United, although they’d have to convince the player.

Southampton were ‘very close’ to sealing deal for defender – Had...