Youri Tielemans had a successful period on loan at Leicester City last season and his performances for the Foxes were enough for a permanent transfer to look almost inevitable.

A potential pitfall for Brendan Rodgers’ side was interest from other, arguably bigger, clubs, but there didn’t appear to be anything especially serious.

There were repeat claims from Belgium of interest from some of Europe’s biggest sides, however, if that interest was genuine it didn’t seem to evolve into genuine efforts to find a deal with AS Monaco and the player.

During the current international break, Tielemans has been asked about his summer, and is today quoted by HLN as saying: “It’s going well. I feel better and better at Leicester. I was pleasantly surprised by the quality of the teams that showed interest, but I had to make a decision in the interest of my career. I think I have taken the right one. At Leicester there is a lot of appreciation, for me as a player, but also as a person. I am also well-placed in the dressing room.”

HLN states that Manchester United and Barcelona were ‘named’, yet there wasn’t really anything concrete in the Catalan media, and claims around the Red Devils appeared to be encouraged by the Belgian rumours.

Not that any of this is an issue for Tielemans. 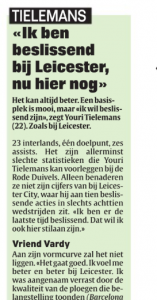 The 22 year old is clearly very happy at Leicester City, and told the Belgian media he’s enjoying playing with Jamie Vardy: “He knows how to play every space. I just have to put the ball where he wants and he will finish it. That’s easy for me.”

On new Foxes teammate Dennis Praet, he said: “He just has to adapt to the intensity of the Premier League. He will certainly help us. We have a strong team, with young, good players. So we aim for the European places.”