Mateusz Bogusz is unlikely to be included in Marcelo Bielsa’s plans at Elland Road next term after he returned to Leeds United following his season-long loan spell at UD Logroñés.

The 19-year-old was aware of this and speaking to the Polish media last month, the midfielder admitted another loan move this summer seems logical. Bogusz also revealed he’s “open to offers” in order to continue his development.

After an unsuccessful loan spell with Logroñés, the Whites player is expected to return to Spain again, according to WP SportoweFakty.

The Poland U19 international is one of the ‘most talented’ youngsters from his country, but it’s ‘too early’ for him to settle in Leeds’ first team.

Therefore, another loan move is on the cards and the report states Bogusz is set to join UD Ibiza on a temporary deal.

It’s claimed the Leeds man ‘flew to Ibiza’ on Monday and will sign a one-year loan contract with the Segunda División side on Tuesday. 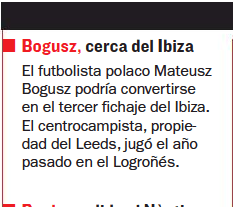 Despite attracting interest from Poland, a deal to join a Polish sides never went through and Bogusz will spend next season on loan at UD Ibiza.

Tuesday’s edition of AS has a short report on Bogusz, stating he’s ‘near to Ibiza’ and set to be their third signing of this window.