Back in August, there was a lot of talk regarding Andrea Radrizzani’s interest in buying Genoa alongside his business partner Matteo Manfredi.

Their bid failed, with the Serie A club’s president, Enrico Preziosi, labelling the whole affair as a ‘bar joke’ and accusing the Leeds United owner of failing to make a ‘serious offer’.

There was talk he could come back, but that no longer seems to be the case, according to Friday’s edition of La Repubblica.

The Italian newspaper explain that while Genoa is up for sale and Matteo Manfredi is still interested, he will return to the fore without the Leeds owner, who ‘didn’t convince’ Preziosi last time around. 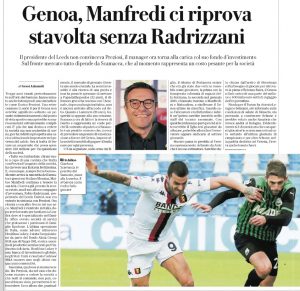 The idea is to find someone willing to put up €130m for Genoa, and it appears Radrizzani’s friend will try to do it on his own.

Backed by his investment fund, Manfredi is now expected to give the club’s purchase another go, and it seems that, without the Leeds man alongside him this time, he’s got a better chance.