Home Championship Leeds United blow backed up as player now out for rest of...
SHARE

The Leeds United player was supposed to be spending the season on loan with Greuther Fürth, and the German club had a buying option to use should Ideguchi manage to impress.

For the Championship club it was a way out of a tricky situation having signed the Japan international from Gamba Osaka with great hopes. His loan to Cultural Leonesa last season was something of a disaster, and cashing in, at whatever level, looked a good idea for Leeds.

Unfortunately, Ideguchi suffered a cruciate knee ligament injury in September. It was decided to treat the issue without an operation, by building muscle and going through an alternative recovery process.

Earlier this week, it was reported he was unable to train, the knee was giving pain again and swelling. An operation was thought to be a real possibility. 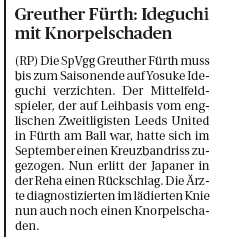 Then slightly brighter news came, with it being reported an MRI scan had showed the new injury to be his meniscus.

Now Rheinische Post report that the cartilage damage will see Ideguchi out for the rest of the season, likely killing the chance of a permanent deal.