Lille need to raise money before the end of this month to meet the demands set by the National Directorate of Management Control (DNCG) and to do this, they are looking to offload a few of their players.

L’Equipe claims the Ligue 1 club’s winger, Anwar El-Ghazi could be on his way out of the club and he is not short of options and is attracting interest from clubs in France and England.

The Dutch international is valued at €5m and Rennes and Saint-Etienne have made approaches for the player. He is also on the radar of the Championship clubs as Leeds United and Aston Villa are looking at taking him on a loan deal with an option to buy. 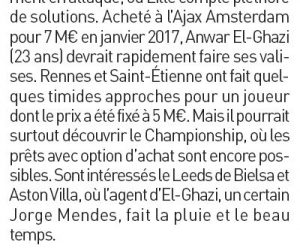 El-Ghazi is represented by Jorge Mendes and his agent is trying to pull the strings to help his client find a new club, with L’Equipe suggesting he has influence at both sides.

Leeds and Aston Villa are in a tussle to sign the same player and the super agent could hold the key in helping the wideman decide his next destination.