This weekend, it’s been claimed that Manchester City are signing a Peruvian youngster called Kluiverth Aguillar.

The report was made by local journalist Jean Pierre Maraví who, on Twitter, said he’s been told by a Benfica coach the 16-year-old is on his way to the Premier League Champions.

And it turns out that this Benfica coach would have been told by someone else that this transfer is done. Quite confusing, we know.

“Renato Paiva, coach of Benfica B, told me: ‘What the scout has told me is that Kluivert Aguilar is already signed by Manchester City”, tweeted the journalist. 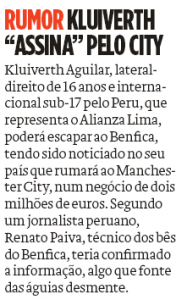 Now Portuguese newspaper O Jogo has a short story about it today, and unsurprisingly, Benfica are denying such claims.

The newspaper says that a source from the Eagles dismisses such information, obviously trying not to get involved in a subject which has nothing to do with the club.

It’s quite rare for journalists to expose sources like this, especially if the person didn’t want to go on record. Perhaps the Peruvian reporter wanted to add a little more reliability to his story, but it backfired now.