Home Europe Jose Mourinho and Man United could be ready for one last €25m...
SHARE 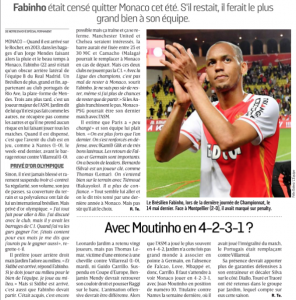 After Manchester United’s victory over Hull City on Saturday, manager Jose Mourinho made it clear he sees no further transfers happening and predicted a calm time for the club as others panic ahead of the transfer deadline.

However, it wouldn’t be the first time the manager had said, or insinuated, one thing about transfers and then gone and done another. Therefore the rumours are going to continue.

On Sunday French newspaper L’Equipe brings up again the possibility of a Fabinho transfer. The AS Monaco player has repeatedly been linked with a move and L’Equipe suggest a couple of things could be irritating him at the French principality club.

Fabinho had wanted to go to the Olympics and represent Brazil, who were ultimately victorious. The defender is quoted as saying: “I did everything to go to Rio. I spoke with the club… When I saw the guys win gold, I was happy for them but I think I could have won too.”

Then there’s manager Leonardo Jardim potentially using Fabinho more as a central player, even in midfield, having bought Djibril Sidibé this summer. Sidibé may have at one point been seen as a replacement for Fabinho, with him earlier expected to leave, but the Brazilian remains.

Manchester United are said to be interested, and L’Equipe believe the player would cost €25m to €30m.

Maybe a move would have been more realistic earlier this summer. Antonio Valencia has been excellent at right back under Jose Mourinho, continuing his development in the position.

Matteo Darmian is adequate back-up, and there are others who can also cover right back if needed. Surely the only way Fabinho arrives at Old Trafford is if Darmian pushes to leave.