Aitor Karanka went some way to calm the doubts over his future as he oversaw his Nottingham Forest side beat Leeds United 4-2 on New Year’s Day.

The Championship club aren’t having the season they’ll have wanted, but in seventh place there’s still a reasonable chance of a push for promotion to the Premier League.

There’s been rumours about possible replacements being lined up should Karanka be edged out, and now L’Equipe comes with something a little different.

In their Thursday edition, the French newspaper says Nottingham Forest have made contact with Jose Anigo.

He’s probably best known as a manager for taking charge of Marseille twice, the club he played more than 200 times for in the city in which he was born.

Anigo’s last job as a manager was with Panionios in Athens. 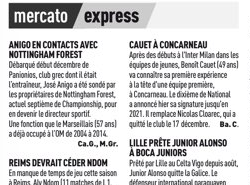 Nottingham Forest are said to have made contact over Anigo becoming their sports director, a job he did at Marseille for a decade.

There’s not anything more said, and no clue to the outcome, so this is one to keep an eye on.