Marten De Roon’s time at Middlesbrough is one the club’s fans have probably forgotten, seeing as they’ve had two managers since, currently watching their beloved side attempt to make the playoffs under Tony Pulis’ leadership.

However, the Dutch defensive midfielder, despite returning to Atalanta just a year after leaving Bergamo, isn’t unhappy with his experience at Riverside, it’s just that he prefers Italy.

Speaking to Gazzetta dello Sport, the 26-year-old revealed the reasons behind his decision.

He said: “I felt good the first year at Middlesbrough. I wanted to try the Premier League, it was my dream, but in Italy I was better both on and off the pitch. Tactically, Italian football is more advanced, and I like to think football. 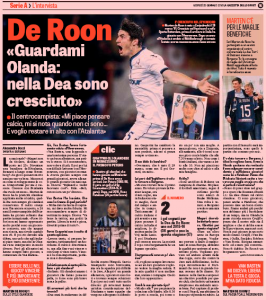 “In Italy, you improve, as De Vrij has demonstrated. Atalanta can also grow as a club. The company is great and I have a special bond with the people from Bergamo.”

We’re pretty sure Middlesbrough’s relegation to the Championship also had something to do with it, even if de Roon appears too polite to say it outright.

While Atalanta aren’t exactly having a repeat of their outstanding 2016-17 season when they surprised everyone by finishing fourth, Gian Piero Gasperini’s side are only four points behind sixth placed Sampdoria after 21 games.

Since his return, de Roon has featured in all but four of the Serie A side’s games, starting 18 of a possible 27.