Having already plucked Jadon Sancho from Manchester City’s youth system and turned him into one of the most coveted wingers in the world, Borussia Dortmund were hoping to do something similar with Jayden Braaf.

The winger was reported last week to be a target for the Bundesliga side, with Bild claiming they had been following the 18-year-old for a long time.

However, it appears they are going to have some competition for the Dutchman, as Kicker are reporting that Bayer Leverkusen are also interested in the 18-year-old.

Yet to make a first-team appearance under Pep Guardiola, Braaf has instead been featuring occasionally for the U23s, but his performances have been enough to turn a few heads. 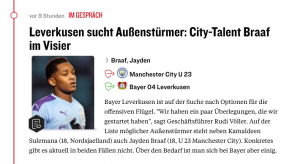 The German outlet state Leverkusen are ‘looking for options’ for their wings, and with Rudi Völler publicly stating they had a few considerations, Kicker add the Manchester City youngster and Nordsjaelland’s Kamaldeen Sulemana.

Both are 18, meaning Bayer are aiming for young and malleable players, but there is ‘no specific information in either case’ for now.