Marcos Alonso has been a vital member of Chelsea’s squad since joining them from Fiorentina in 2016.

His form has seen him attract interest from Real Madrid and Atletico Madrid as the two clubs were looking at the possibility of signing him in August, according to AS.

However, no deal took shape and the left-back has played every minute in the Premier League under Maurizio Sarri’s guidance.

Luis Enrique has included in the 27-year-old in the Spain squad for the fixtures against Wales and England and while on the international duty, AS sat down for an interview with the west London club’s player. 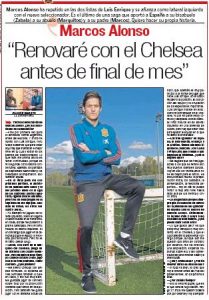 The former Bolton Wanderers man’s contract at Stamford Bridge runs down in 2021 and he provided an update on his future when asked about the rumoured interest from the Champions League winners.

“What I can say is that I’m very calm and very happy at Chelsea. The club should also be [calm] with me because, although I still have over two years of contract ahead, they have offered me an extension. We’re talking about it, and talks to renew are already advanced,” Alonso explained.