Home Europe “Maybe I smile a bit more now, I had a few problems”...
SHARE

An undisputed fan favourite at Manchester United, Anthony Martial is enjoying a rather impressive start to the season following a disappointing first campaign under José Mourinho.

Rarely smiling on the pitch, except for when he puts the ball in the back of the net, the 21-year-old’s apparent lack of emotion has been both praised and criticised, normally depending on his performances.

Either described as ‘ice cold’ when in good form or ‘uninterested’ when nothing goes his way, the France international was made aware of this during an interview with SFR Sport over the weekend.

Perhaps a bit more cheerful these days, which even José Mourinho has noticed, Martial was rather quick to defend himself, with a smile.

He said: “Maybe I smile a bit more now, I had a few problems in my life, but now that’s over. Now I’m really focused on my football and I’m happy to play. Really, if you see me in a group, you’ll see I’m one of the first guys to laugh.

“Off the pitch, I’m a bit shy, I don’t show my emotions that much, but I’m happy, even if you don’t see me smile, I’m still happy. Maybe on the pitch it’s because I’m focused. I’ll try and smile more, but it wouldn’t be natural if I forced it.” 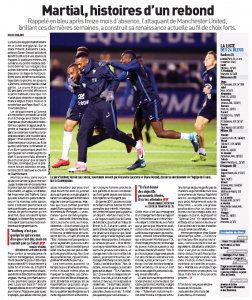 Speaking to L’Equipe on Wednesday, one of his former teammates, Zakarie Labidi, explained: “He told me this summer that what helped him was the love from the fans. He always wanted to prove himself.”

With two France games to look forward to, being called up for the first time since the 2016 Euros by Didier Deschamps, there’s now a lot for him to smile about.

That, and the six goals and six assists he’s managed to help Manchester United with in eight starts.