On November 15th, Gazzetta dello Sport stated Arsenal were interested in signing Renato Sanches in the summer, but were put off by Lille’s asking price.

A day later, the Gunners’ desire to sign the midfielder in the winter market was discussed in the French media. Le10 Sport explained the north London club are ‘very interested’ in the 24-year-old and ‘have made their interest known’ to him.

The Portugal international suffered an injury in August and regained full fitness in October, which blocked a transfer to Barcelona in the last transfer window. This has been confirmed by the player himself during an interview with L’Equipe.

Despite struggling during his time at Bayern Munich, the player now admits he feels ready to leave the Ligue 1 winners for a big club.

“When I arrived at Bayern [in 2016, at 18], I was not ready to play in such a club. I was very young. And when I got ready, the opportunity to play with this team never came,” he said.

“Today I feel ready. I understand football better, I have more experience, I know what to do to play in this kind of club and that changes everything.” 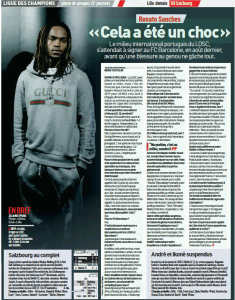 wanting to sign him in January, Sanches explained: “Maybe Milan and Arsenal are interested but I don’t know.

“I spoke with my agent, I know which clubs are calling and which are not, but I can’t tell now. But I know I’m ready. If an offer comes in, I’ll find out what’s best for me.”

Sanches’ comments would come as an encouragement for Arsenal, if they retain a concrete interest to acquire his services in the winter market.