Home Europe “How am I going to get past him?” – Striker reveals first...
SHARE

Of the many fascinating Champions League ties to come out the draw last week, Liverpool vs Atlético Madrid is up there with the best.

Few teams will have wanted to draw the reigning European champions, who are currently flying on all fronts under Jürgen Klopp’s careful management.

The Reds are arguably the most dangerous side in Europe at present, dominating the Premier League and showing no signs of slowing down despite an ever-growing fixture list.

Beating them is no easy task, as many have discovered, and it will be fascinating to discover if Diego Simeone’s well known, defensive nous can stop Liverpool’s dangerous attacking style.

Some might consider drawing them as bad luck, and Atlético João Félix has admitted there was a sense of that when watching the draw.

“We know that maybe the teams that were there they were the most complicated, they’re the European champions, but let’s do our job and try to get through.”

Key to Atlético’s hopes of success will be finding their way around defender Virgil van Dijk to penetrate Liverpool’s defences.

The Dutchman has established himself as the best defender in Europe over the last 18 months, with many a striker falling short of breaching his and Liverpool’s defences.

It’s a problem Félix is well aware of, having struggled to best the Dutchman on video game FIFA as well. 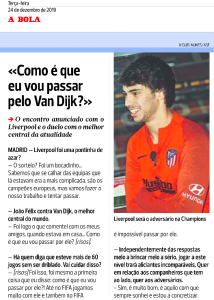 “That’s what I said to my friends when I was at home… How am I going to get past him?” he added.

“That’s it, that’s really the first thing I said: how am I going to get through him?! Even on FIFA, we played a lot with him, and it’s impossible to get past him.