After many years of occasionally playing at Chelsea, Emerson Palmieri finally found himself a new club, albeit a temporary one.

The defender has been pushed to one side by most managers since Maurizio Sarri, but that didn’t stop Roberto Mancini to pick him for his Euro 2020 squad, helping his nation lift the trophy along the way following the injury to Leonardo Spinazzola.

Returning to Chelsea where Thomas Tuchel prefers Ben Chilwell and Marcos Alonso, the Italy international sought out somewhere else to play, with Napoli seemingly the favourites.

However, that deal never materialised, and Emerson still isn’t sure why that is the case, saying as much to Gazzetta dello Sport in an interview on Friday, where he was asked about the reasons for his move to Lyon, where he eventually landed late on in the transfer window.

He said: “After the Euros, I wanted to play continuously, to feel important. At Chelsea, I had little space, and Mancini told that, at my level, you must always be on the pitch. I talked to [Luciano] Spalletti and gave my agreement to Napoli. 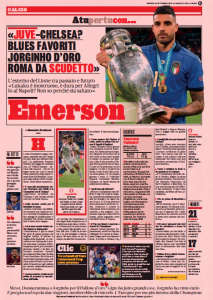 “I don’t know why it wasn’t done. Lyon presented me with a good project and I decided in two to three days. I think I have made the right choice. There is a young and united group. And the Brazilians helped me settle in immediately”.

Emerson has had a good start under Peter Bosz at Lyon, starting every game since his arrival and chipping in this week with a goal in their 3-1 win over Troyes in Ligue 1.

There is no clear option to buy for the French club, but they do appear to have a right of first refusal on the player, meaning Chelsea will notify them if any bids come in for the Brazil born Italy international.