Hugo Lloris has saved three penalties in a row.

He’s stopping them at the rate of one a month at the moment, and that’s even more impressive when it’s considered it was previously one per year.

The Tottenham captain last saved a penalty for France in 2012, and there’s subsequently some questioning in the country over the way he approaches them.

L’Equipe believe he’d previously moved too early, allowing the penalty taker to then pick a spot knowing the keeper was setting out the other way.

They’ve spoken to Lloris since he saved Sergio Aguero’s effort in the Champions League this week, and he’s at a loss to explain why he’s all of a sudden got such excellent form on penalties: “I don’t know… But I want to take advantage of the moment and continue, because, I said, I must stop one for the France team, now.

“It’s still a little psychological, surely. I thought Sergio Aguero might know that on the last two penalties I stopped, I went right, so this time I went left. A goalkeeper must also think that there is a lot of pressure on the shooter.”

Lloris has recently come in for criticism, after a mistake against Liverpool, and there were even calls for Mauricio Pochettino to drop his first choice goalkeeper ahead of the Manchester City match. 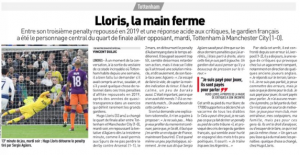 He’s not letting it bother him: “I’m not perfect, I can make mistakes, but I know what I give for the club. I’m paid to play, they’re paid to talk. I have no revenge to take, it’s part of football. This is not a source of motivation: I play for my club, my coach, my teammates, my family, but not for those people. They have the right to analyse, or try to do, which is not the same thing.”