Home Premier League Chelsea “I don’t belong at Chelsea” – Player reveals why he is not...
SHARE

Chelsea signed Mario Pasalic from Croatian outfit Hajduk Split in 2014 and was immediately loaned out to Elche, following which he had temporary spells at AS Monaco, AC Milan and Spartak Moscow.

The central midfielder returned to Stamford Bridge and had no hope of making his way into Maurizio Sarri’s plans for this season as the Blues sanctioned another loan move in the summer transfer window – this time to Atalanta.

He can join the Serie A outfit on a permanent deal in 2019 as they have an option to secure him as a part of the deal. The 23-year-old was a part of the former Napoli coach’s pre-season trip to Australia, but his time with his parent club was cut short as he joined the Italian club on a loan transfer.

Pasalic spoke to Gazzetta dello Sport and explained why it’s difficult for him to have a future at Chelsea or any other big club for that matter.

“In a week with them in Australia, I experienced the football of Sarri, quality and aggressiveness, possession and pressing, all combined very well,” he said. 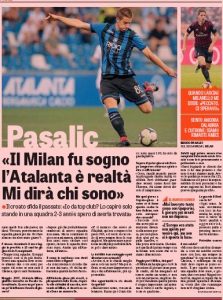 “I asked myself another question. What good would it have done me to sit on the bench? I don’t belong at Chelsea right now, or at any top club.  I have to understand if I can be. And to understand it, I need a team to stay at and play, two or three years.

“Maybe I’ll be back there [Chelsea], maybe you’ll understand that my big club is Atalanta, but I don’t want to make the wrong choice anyway.”