Besiktas have a clause to make the Brazilian’s loan move from Benfica permanent but there’s endless speculation about what will actually happen. Talisca himself gets a say in where he plays next season and that creates another tangent for claims, because wages are likely to pay a role in any decision.

Wolves are continually dragged into the story and whilst we’re not entirely sure that’s through anything other than habit, we can’t exactly ignore it.

A claim from A Bola this week is, however, interesting, if only because the Portuguese newspaper show just how highly they think of Wolves now the club are a Premier League outfit.

A Bola state it’s unlikely Talisca will remain in Turkey beyond the end of the current season, and give their reason as interest from: ‘Much more powerful clubs with greater 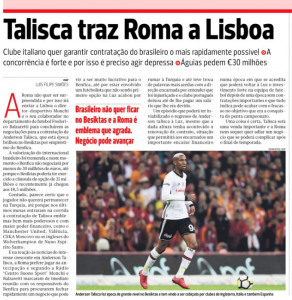 financial strength, such as Manchester United, Valencia, CSKA Moscow or the Wolverhampton of Nuno Espirito Santo.’

That certainly sounds nice and Wolves fans will hope it’s something they have to get used to.

Leicester City ‘have doubts’ about summer signing – Money likely too much

Leicester City ‘have doubts’ about summer signing – Money likely too...