April 12th saw claims from Portugal that Everton are back in the hunt to sign Yacine Brahimi from FC Porto.

The Premier League club have long been linked with the Algerian, indeed it’s one of the first signs of summer really approaching, and a deal was estimated at costing over €40m.

Ten days later and the claims were back, with Everton placed ahead of an option to move to Turkey: ‘But, Everton… ‘it may be so’ say the Portuguese newspaper, explaining the ‘charm’ of the Premier League is one which attracts Brahimi.’

Now A Bola is pushing it again and this weekend give a full page to the story, talking up a move to the Premier League. Everton get their routine mention and the English football advantage is played out.

However, reports from Algeria are leaned upon and when we chased them back it seemed a lot of rumour crossing between the English, Portuguese, Turkish and Algerian press… without anything really concrete. 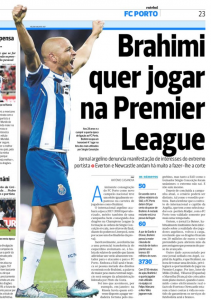 It would be no surprise if Brahimi fancies a move to the Premier League over Turkey, for the vast majority of players that goes without saying, and that’s a clear advantage for Everton should they be really interested.

Whilst there may be insistence a transfer could happen and Everton are interested, it doesn’t really feel concrete right now.