The sun is out and the transfer window is appearing on the horizon, so the Portuguese media are talking up Yacine Brahimi to Everton.

One of the transfer rumours which will never die, Brahimi to Everton pops up every now and again. In recent weeks it feels like the Portuguese press have been consciously trying to get the claims back out there.

Is that because there’s something in it? Who knows, but A Bola have given Brahimi rumours a full page over the weekend. There’s said to be growing interest, with Everton and Besiktas leading the way.

And, if there’s anything in the Goodison Park interest, then A Bola have good news. The winger doesn’t fancy a move to Turkey, it doesn’t attract him enough from FC Porto. 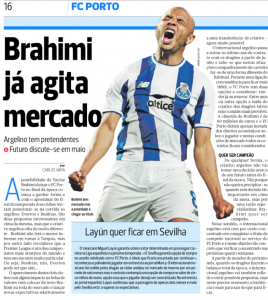 But, Everton… ‘it may be so’ say the Portuguese newspaper, explaining the ‘charm’ of the Premier League is one which attracts Brahimi.

That’s true for many players. Everton would almost certainly pay much higher wages than Porto, and likely higher than Besiktas, and the bright lights of England’s top flight are like a homing beacon for talented footballers.