Portuguese newspaper A Bola this weekend have an article celebrating the rise of Rodrigo Battaglia.

The Argentine midfielder has had a much better second half of the season, becoming increasingly important for Sporting and getting consistent starts under manager Jorge Jesus.

A Bola point out there’s widespread interest in the player and  named West Brom, Sevilla, Betis and Villarreal. It’s claimed West Brom were the first club to try and sign Battaglia during the January transfer window, and those reports were also carried in Portugal at the time.

Back then Battaglia wasn’t hugely important for Sporting and had West Brom pushed hard enough, and offered enough, they’d have had a good chance of getting their man. The interest seemed curious given Battaglia was struggling to find prominence at Sporting, but it now looks justified.

A Bola say Sporting are well protected by the player’s €60m buyout clause. West Brom could have probably got him for less than half that in January but weren’t prepared to part with so much. 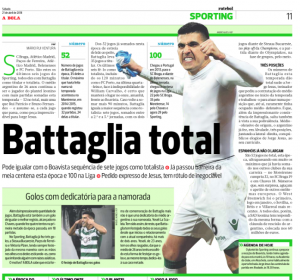 After a West Brom offer of €15m was big news in Portugal, it was then reported the club would have to pay a little over €20m to get their man.

They didn’t, and with Battaglia now more important and West Brom heading for the Championship, this one looks to have died.

It seems it was the right idea, just not enough money.