Braga midfielder Ricardo Esgaio insists his side will beat Rangers in the second leg of their Europa League last 32 clash.

Rangers beat the Portuguese side in a thrilling encounter at Ibrox on Thursday, with Steven Gerrard’s side battling from two goals down to secure a 3-2 win.

The Gers had found themselves behind after 11 minutes courtesy of Fransérgios’ superb long-term strike.

They were two behind when Abel Ruiz slotted in the 59th minute but then mounted an impressive comeback, with two goals Ianis Hagi and one from Joe Aribo handing them a narrow advantage heading into the second leg.

In truth, the result was harsh on Braga, who had not only matched Rangers for much of the game but outplayed them as well.

They will prove difficult opponents in the second leg in four days, and Esgaio is backing his side to overcome their first-leg defeat and progress to the last 16.

“We knew that teams like Rangers believe from start to finish and that’s what happened: they believed, and they turned it around,” he told A Bola.

“Before their first goal, we had the opportunity to finish the game and make the 3-0. We couldn’t, but the qualifiers are open.

“We’re going to play at home, we want to progress, and I strongly believe that next Wednesday we’ll achieve that goal. 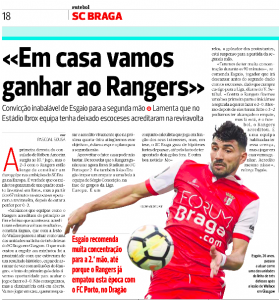 “Against Rangers, we had a good first half and started the second half wanting to take the 2-0.

“Even after they made it 3-2 we could have levelled the tie, but there it is, it’s football, Rangers believed it.

“It’s a team used to having that belief, but playing at home, we’re gonna win. I really believe that.”