Michael Ballack has been speaking to SportBild about various things related to German football, and one of those is Arsenal’s Mesut Ozil.

Asked about Ozil possibly swapping Arsenal for Bayern Munich, given the player’s contract runs out in June 2018, Ballack explained that the life in English football, and in London, is likely to see the footballer stay where he is.

Ballack is quoted as saying: “Mesut Ozil is an outstanding footballer. Many clubs like him. But he knows that he enjoys a very high place at Arsenal. He lives in London, one of the most beautiful cities ever.

“To this end, Arsenal is a club that has an incredible impact on the world. If you are a top player in England, the cult around you is bigger than in 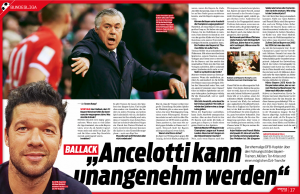 Germany. You are treated more respectfully, especially. These are all reasons for an extension.

“But if he could win something big, the chance at Bayern is, in my opinion, bigger.”

Arsenal’s lack of winning something big is the only drawback, but Ballack seems to believe all the other positives about playing for the club will overshadow that. Financial offers will likely come into it, but it’s got to be considered unlikely that Arsenal would lose Ozil through not offering a good enough contract.

The attraction of London is a real boost for the Premier League clubs based there. It’s not the perfect city for everyone, but it’s almost perfect if you’re a multimillionaire footballer.