Fulham goalkeeper Alphonse Areola is set to be called up to the France squad by Didier Deschamps as an option for the fourth spot in the group.

That’s according to L’Equipe, who say he is expected to compete with Benoît Costil as a result of playing regularly with Fulham this season.

Areola joined Scott Parker’s side on loan from Paris Saint Germain in the summer, seeking regular playing time that wasn’t on offer at the French giants.

Despite a couple of shaky moments, he’s largely impressed, with a tally of nine clean sheets and just 33 goals conceded in 28 Premier League games a decent return given Fulham have been fighting relegation all season.

He’s now set to be rewarded for his efforts, say L’Equipe, with Deschamps looking at him as the fourth goalkeeping option for his squad during this international break. 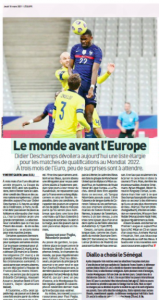 That is because Areola, who was a World Champion with France not long ago, now ‘plays regularly’ at Fulham, something he was not getting at either PSG or during a loan spell with Real Madrid last season.

Of course, fourth choice means he’s still pretty far down the pecking order but with Deschamps looking at his options, the Fulham man has put himself in with a chance of making the Euros this summer.