Home Championship Fulham have ‘not given up’ on signing fullback – Price continues to...
SHARE

Portuguese newspapers are today full of stories about the race for FC Porto player Zaidu Sanusi, as several English clubs are said to be interested in the left-back.

On Monday, the British media wrote that the likes of Brighton & Hove Albion and Crystal Palace are both keen on the 25-year-old as well, therefore forming an interesting competition to land him this summer.

It turns out, however, that the Portuguese press only claims to have information on the chase from one club. That’s Fulham.

Newspaper Jornal de Notícias writes that the Cottagers ‘were the first to join the race’. And even though the €20m requested from Porto stopped them actively continuing the pursuit, the London side have ‘not given up’ yet. 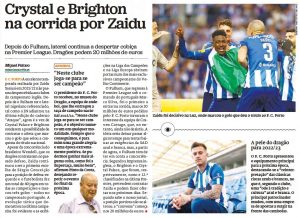 It’s said that Fulham’s intention would be to let time pass and see if Porto will lower their demands. However, with the news about other English sides becoming interested, the Whites should be concerned about competition for the signing.

Jornal de Notícias insists that the Dragons didn’t change their stance on Zaidu’s future, and will continue to ask for €20m to let him go. Now we wait to see how Fulham will react.